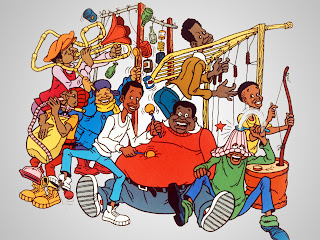 I was born on March 28th, 1981. That' makes me 31 as of this post and relatively old as far as things on the internet go. One good thing about growing older is that as time passes, you gain an appreciation for just how far any number of things, from technology, to equality have progressed. It's an amazing thing to consider that my parent's generation can recall seeing the transition from black and white television  to the age of color TV, and their parent's before them, are of a time when they could remember the first time they saw the magic box. The generation that I'll be part of producing, won't know a time when they can't hop online--by computer or phone--to see whatever video they desire, almost instantly. Advances such as these are acceptable and to be expected, but there are some things I'd like to never see go away.


2D animation is one of those things. I don't mind the prevalence of 3D animated  films, like the Toy Story, and Shrek movies. I don't hate them, nor do I want them to go away. Sadly, I don't love them like most people, though. I've never been able to figure out why that is, but for some reason, I feel like traditional 2D animation just speaks to me more. It offers me that immersion that I'm always going on about--that sense of escapism, that I crave.

Regardless of your stance on animation, do yourself a favor and watch this award-winning  black and white animated short from Walt Disney Animation Studios. It stylishly tells a good story in a beautiful, yet funny way. Although it is a 2D short, it does borrow from contemporary computer generated 3D techniques at times.
Posted by Marvin at 6:30 PM
Email ThisBlogThis!Share to TwitterShare to FacebookShare to Pinterest
Labels: 80s baby, animation, cartoon, movie theaters, movies, Paperman