What's in Your Bag, Marvin? 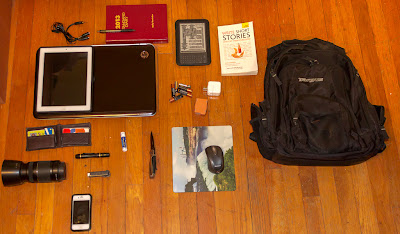 I'm a huge fan of The Verge, on every level. It's a toss-up as to whether it's more because it's a good source of credible and relevant tech coverage, or because it's a beautifully designed site, that draws me in, with its bold colors and irregular structure. Regardless, I visit the site multiple times, daily to keep up on things around the net. Two regular pieces featured on the site, that I particularly enjoy are the '90 Seconds on The Verge', in which a Verge staffer dispenses the day's headlines in a video, in well, 90 seconds. The other is the 'What's in Your Bag'  segment, where a Verge staffer or guest, photographs and discuss the various things he or she carries around with them on a regular day. I like those posts so much, I decided to steal the idea, and do one of my own. Hit the jump to see what I carry around with me in my bag. I'll try to provide a link where applicable.

About 3 years ago, on a whim I decided that a man should always carry a knife on his person for whatever the day may throw at him, and I haven't been without one since. You'd be amazed at how often this thing comes in handy--I'm talking multiple times a day, here. When I came across this knife in Home Depot, I decided it was the perfect fit, for me. It's functional, small, but solid, and cheap. I think I'm on my 3rd one, and it's only because I lost my first two. At roughly $10/replacement, it won't break the bank, either.

Update: In November, I switched to this tactical knife from Smith and Wesson, and I'd never go back. This knife is superior to the Sheffield in every measurable way, for only ~$2 more. The Amazon photo doesn't do it justice. 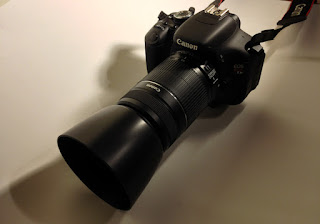 I've been wanting to learn photography for a few years now, but I could never decide on what camera  and system to get. Eventually I settled on a Canon T3i to get started and I'm really enjoying it. I don't think I'll ever be a great photographer, but I'm sure I'll be a better one, and it's ridiculously fun to learn, too. Don't worry, it's not always this big when I carry it, but admittedly I do have this long telephoto lens and lens hood in my bag. A few days ago, I decided what my next lens will probably be, and then that same night, B&H announced that it'd be on sale for the whole month of February. It's either that, or a 'Nifty Fifty'

My tablet of choice is a 2nd generation iPad, and with wifi being fairly ubiquitous today, I didn't think the extra $130 Apple charges for the ability to be able to sign-up, to pay for a data plan was worth it, for me. It doesn't sport a retina display, and the battery doesn't hold the near-magical charge it once did, but this thing is still a workhorse, and it gets used daily. It's the perfect device for browsing the web, watching videos, or killing time with a game, though admittedly, gesture-based games aren't my cup of tea.

I was reading e-books long before dedicated e-readers existed, and paper editions, obviously, much longer than that, and thus I tend to have a regular paperback book with me. Where my e-book reading used to consist of flat text files, read on the small screens of Palm Pilots and Pocket PCs, it's now primarily done on a device and platform far more elegant. I use a a 3rd generation Kindle(no ads), and I think it's the best e-book platform out there. Before I had this, I carried a 2nd gen device with a cellular chip, for you know, purchasing and downloading e-books on-the-go--a feature I never used once. I prefer the speed and reliability that wifi affords me. Someone just gave me the diary a few days, ago, and I'll be using it as a regular notebook, not a diary. 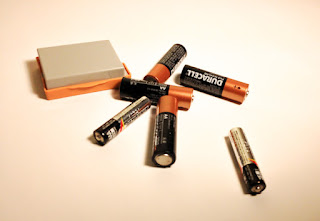 I'm one of those people that Apple ear buds don't work for. Their traditional buds won't even stay in my ears for the length of a single song, and that's when I'm sitting, with minimal movement. I haven't tried their newly redesigned 'EarPods,' yet, and ideally I'll never have to. I absolutely love my JVC Marshmallow buds, so much, so that the pair you see pictured are actually just my spare(new). The actual buds I use are the same pair I bought almost 2 years ago. These buds are surprisingly rugged, and they still look and sound the same way they did the day I got them. At $25 locally, I'd  easily recommend them. but Amazon sells these buds for only $12, so you can see why I have a spare set. I should probably mention, I'm far from an audiophile, but I really enjoy the sound they produce. The other bits include a LensPen for lens maintenance, a headphone splitter cable, and a Fluke LVD1 Voltage Tester with LED flashlight. Oh, and of course, one should always have spare batteries, because these things only die when you most need them.

If you know me, you may know that I tended bar for almost 9 years. This bottle opener was probably in my pocket for 95% of those shifts. This thing has seen some stuff, and it shows in the wear. It's beat up, mangled, discolored, and ripped, and I wouldn't have it any other way. I've opened thousands of beers (and  hundreds of Grey Goose bottles...try it) with this particular opener, and thus it feels like it's molded to my hand. It's easily my most used tool, and the one I know, most intimately. Why do I carry it around with me? Beer.


I decided not to photograph my laptop or backpack, other than that group photo at that beginning. My backpack is just a generic Targus bag I've had for over 10 years. I got it at Comp USA during a Black Friday sale, just to put things in perspective. It's seen a ton of use and wear, and it doesn't have a rip or broken zipper on it anywhere. I love this machine. My laptop is an HP dv7, with a Core i5 Intel chip, a dedicated video card and 8 gigs of memory. It also sports beats audio and a fingerprint scanner, and an internal 4G antenna, for those random times when I'm not near wifi, and need to get online in a hurry. My laptop smokes my gaming PC as far as specs go.

This was a lot of fun, so feel free to share what's in your bag.

Do you know the latest Fluke 1651b Multifunction Tester ... They are perfect for part P installations & basic domestic testing with large LCD screen. Thanks.